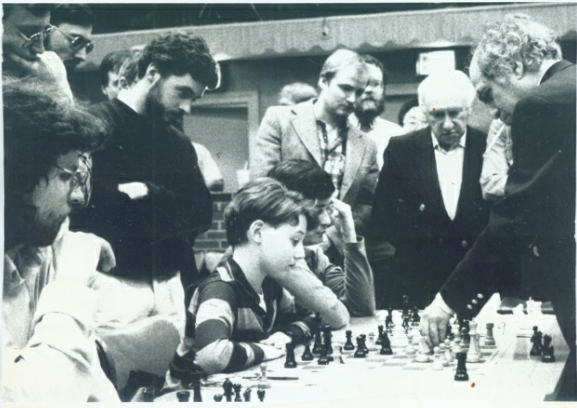 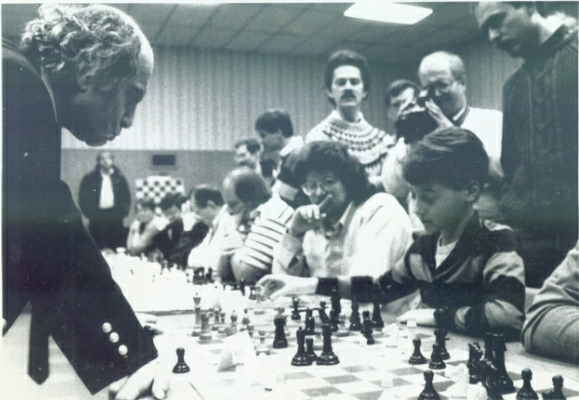 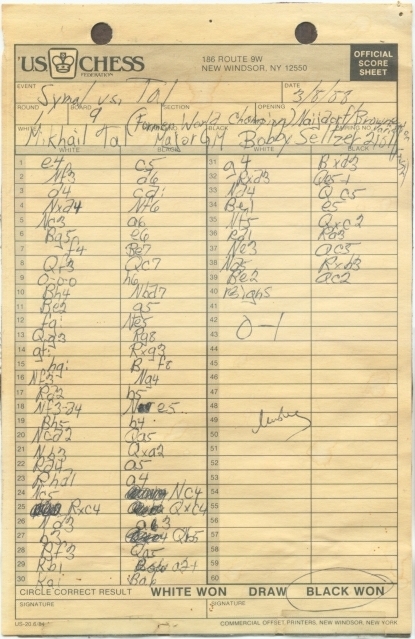 from the The Christian Science Monitor, April 05, 1988

Matching minds with a grandmaster. The Monitor's sports editor and 29 other brave souls recently went eyeball to eyeball with a legend of the chess world in a simultaneous competition. There were some surprises...

by Larry Eldridge, Staff writer of The Christian Science Monitor

Framingham, Mass.—CHESS still means Bobby Fischer to most people; some are getting to know world champion Gary Kasparov, too; but to aficionados the name that conjures up the most vivid images of excitement and magic at the board continues to be that of Mikhail Tal. So when I heard that the legendary attacking genius from Latvia was making his first visit to America, and giving a simultaneous exhibition in my own area, I quickly signed up to play.

Not that I harbored any serious illusions about beating one of the game's all-time superstars - the man who in 1960 became the youngest player up to that time to win the world title, and who is still one of the top grandmasters. And any thoughts that Tal might be over the hill at this stage of his career had just been dispelled by his win in the $50,000 World Blitz Championship ahead of Kasparov and former world titleholder Anatoly Karpov.

It would be fun to try, though; perhaps to at least give him a run for his money. Somewhere inside me a little voice kept saying things like, ``On a given day...,'' and, ``Anybody can make a mistake when he's playing so many people at the same time!''

Preparing for the contest was easy enough, since I have several books of Tal's games in my library. After burning the midnight oil for a few nights, I figured I was pretty well versed in his style, and in the ways he was most likely to meet my pet variation of the Sicilian Defense.

Finally, the big night arrived. I and 29 other intrepid souls, each having paid $50 for the privilege, sat down at rows of tables while a hundred or so spectators jammed into the Framingham Chess Club to hear Tal give a lecture and then watch him demolish player after player.

The lecture was most interesting, as Tal related anecdotes from his career, then answered questions on just about every chess subject imaginable.

Did he have a particular favorite among his games? ``I hope I haven't played it yet,'' he replied.

But among those he has played, does any one stand out as the most memorable? ``Perhaps the final game of the first match with [Mikhail] Botvinnik,'' he said, recalling the meteoric rise that carried him all the way to victory in the 1960 title match when he was only 24 years old.

``Or perhaps the final game of the second match,'' he added with a rueful smile, referring to the rematch in which Botvinnik regained the crown a year later.

There have been many other big moments, most of them happy, during Tal's long and illustrious career. He has won six Soviet championships, a record matched only by Botvinnik, and nearly 50 international tournaments. And his record as the youngest-ever world champ stood until two years ago, when Kasparov broke it at age 22.

But more important even than all this success was the way he achieved it. For at a time when chess seemed to be growing too scientific, Tal's risk-taking, spectacular play was a throwback to the game's earlier romantic era.

In his young heyday of the 1950s and '60s, Tal repeatedly stunned the chess world with his daring attacks, frequently sacrificing pieces in unclear positions and then outplaying his opponents in the ensuing complications. This made him a hero to the public, which was tired of the dull, cautious play of most grandmasters. Sometimes in post-game analyses, though, his sacrifices were found to be unsound, succeeding only because the bedazzled opponent had failed to find the correct defense. Some critics called him lucky, but clearly it happened too often to attribute his success to chance. Or, as one chess writer of the time put it, ``The plural of luck is skill.''

Perhaps as good an indication as any of that skill is Tal's plus score of 4 wins, 2 losses, and 5 draws against Fischer - one of the best records any player was able to achieve in combat with the enigmatic American grandmaster. Tal expressed sadness that Fischer dropped out of the game after winning the world championship from Boris Spassky in 1972.

``All Soviet players are sorry that the American genius no longer plays,'' he said.

Finally, the lecture was over, and the moment we had all been waiting for was at hand. Tal began his tour, moving rapidly from board to board. He began my game and almost all others, as I had expected, by moving his king's pawn, so I was able to play the variation I had prepared.

For 10 moves, my game followed a 1969 contest I had noticed the night before in which Tal had lost to the great Danish grandmaster Bent Larsen. But on his 11th move, the former champion varied from that earlier contest and I was on my own. A couple of moves later, I made a small mistake - and one mistake is all you get against a player like Tal. He swooped in for the kill, and it quickly became apparent that I was doomed. I could have played on, as several others persisted in doing despite similarly hopeless positions, but I did what one is supposed to do when facing the inevitable and resigned.

It was only the 15th move, and I was the first player to lay down his king. The embarrassment and humiliation of it all did have one redeeming aspect, however, for my quick demise enabled me to spend the rest of the evening watching the real excitement a few boards away, where 12-year-old Bobby Seltzer was giving the grandmaster all he could handle.

This game, interestingly, followed for quite some time the exact moves (with a couple of transpositions) of Tal's first game against Fischer, a 1959 contest which ended in a draw. Young Seltzer, who relies primarily on his own natural ability and had not ``booked up'' for the game, was unaware of this fact until afterward. Tal may or may not have remembered the Fischer contest, but in any event, on Move 14 he varied from his previous play and launched a dubious attack in which he sacrificed his queen for material of almost equal value, but not quite.

Perhaps the veteran grandmaster expected to shake up his young opponent and dazzle him in the ensuing complications. Undoubtedly, he did not realize that the youngster sitting across from him was not just your average 12-year-old, but the reigning national elementary champion and a competitor who had already achieved the level of candidate master. Indeed, Bobby was undoubtedly one of the strongest players in that room - as Tal now began to find out.

Each time he came around to Seltzer's board, he found himself spending more and more time studying in vain for some way to whip up an attack - or later, as his position began to deteriorate, to at least salvage a draw.

Most youngsters - indeed, players of any age - finding themselves on the verge of beating a superstar like Tal would be likely to crack and start making little mistakes that let the grandmaster get back into the game. But Bobby made relentlessly strong moves, and there was just nothing Tal could do about it. At his 40th move and facing certain defeat, Tal took his king off the board in a gracious gesture of submission as the room exploded with applause for his young conqueror.

Tal's overall score was 26 wins, 2 draws, and 2 losses - but the big one, of course, was the game with young Seltzer. And how did Bobby explain his coolness and poise during that last hectic hour? How did he keep his wits about him with dozens of onlookers crowded around his board, and with the prospect of such a momentous victory hanging on every move?

``To tell you the truth,'' he said, ``I was concentrating so hard on the position that I forgot I was playing a grandmaster.''

No wonder I lost - I did it the other way around! I was so aware I was playing the great Mikhail Tal that I forgot to pay attention to my position.

I have a feeling, though, that in my case it wouldn't have made much difference!

Larry Eldridge has been a tournament chess player for 30 years and maintains a Class A rating. He is also an active chess teacher, organizer, and writer.